Guilt-Free Way to Get Rid of Halloween Pumpkins 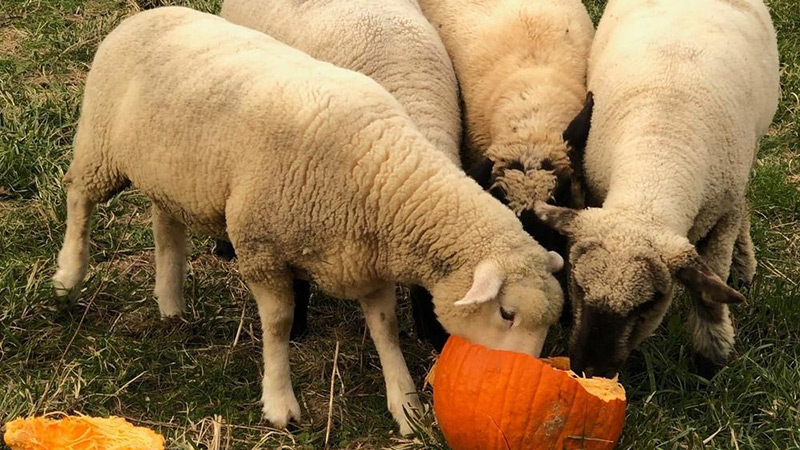 by: Hannah Wallace
REASONS TO BE CHEERFUL, November 1, 2022

Every November, Jennifer Seifert stared at her leftover Halloween pumpkins and felt one thing: guilt.

“They’re still perfect and Thanksgiving is here. What am I gonna do with them?” she recalls thinking. So in 2017, while buying eggs from a farmer in her area of Loudoun County, Virginia, she asked if he might have any use for perfectly good, weeks-old pumpkins. “He said, ‘Of course, my animals would love them!’”

This friendly conversation was the seed of Pumpkins for Pigs, an online list of US farms that take pumpkin donations. Five years later, though it’s still virtually a one-woman show (her friend lends a hand with design), the website now features 360 farms from 37 states. “Every day we get a couple more farms or animal sanctuaries. I’m hopeful we’ll get to 400 this year,” Seifert says. “I want people to realize how sustainable and do-able this is.”

The US grows over two billion pounds of pumpkins each year, according to the USDA. Some estimates show that over half of that goes to landfill rather than being composted or eaten. Like all food waste, pumpkins rotting in landfills create methane, a potent greenhouse gas that contributes to climate change. Fortunately, pigs, chickens, goats and other animals happen to adore pumpkins.

Though Seifert started by asking people to donate only uncarved pumpkins, she has since heard from farmers who would also love to accept carved pumpkins, as long as they’re free of oil-based paint (water-based is okay), unbleached and not rotten. (Some people apparently bleach jack-o’-lanterns to retard mold growth.)

“I had to put out a PSA about the no bleaching,” Seifert says. “Every year you learn something new!” 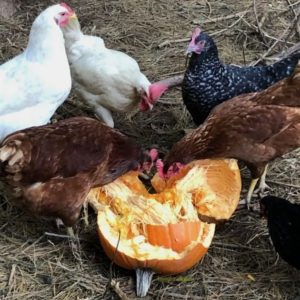 Using the weight of an average pumpkin, Seifert estimates that farms that are registered on Pumpkins for Pigs diverted roughly 540 tons of pumpkins from landfill last year.

Some US zoos take pumpkin donations too. The Oakland Zoo works with local pumpkin patches like Moore’s Pumpkins and Fuji Melon Pumpkin Patch to take their surplus. But in years when the patch donations are slim, the zoo encourages Bay Area residents to donate their uncarved pumpkins. (Check the zoo’s social media to find out how to drop yours off.) Marketing Manager Isabella Linares says elephants and hyenas especially love the orange fruit. “The hyenas rip it apart!” she says. Zookeepers cook it up for the vervet and squirrel monkeys. Lions won’t eat pumpkins, Linares says, but zookeepers will use them as an enrichment tool, hiding meat treats inside.

One organization in the UK is promoting the consumption of Halloween pumpkins, too — but by people. The British didn’t always embrace dressing in costume on October 31, but as Halloween gained popularity there, pumpkin waste increased too. 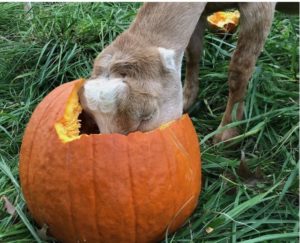 Nine years ago, a London-based environmental organization called Hubbub started an “Eat Your Pumpkin” campaign. “While the trend of carving a pumpkin had turned up here, there isn’t as much of a culture of eating pumpkins in the UK as there is in the US,” says Aoife Allen, Hubbub’s director of food, fashion and communities. “We wanted to challenge that and remind people that pumpkins are food.”

Not only that, they’re nutritious food, high in vitamin A, fiber and antioxidants like beta carotene, lutein and zeaxanthin. Roasted pumpkin seeds, which make a yummy snack, are a rich source of zinc and magnesium, and a good source of protein and fiber to boot.

In the years since, Hubbub has run pumpkin festivals and pumpkin parties in the weeks before Halloween. Though that died down during the pandemic — when they ran a mostly virtual campaign — it returned with a bang this year. In addition to a slickly produced “No Pumpkin Left Behind” video, which played before spooky movies in theaters across the UK, the charity got social media influencers to share recipes and cooking tips on Instagram.

The most commonly used variety of pumpkin for jack-o-lanterns, at least in the US, is the Howden. You can use them for baking (in pies or breads) or in soups with warming spices. Other types of pumpkins like sugar pie, kabocha and hubbard are suitable for simple preparations. Cut them up, toss them in olive oil and salt, and roast them in the oven at 425 degrees Fahrenheit. You can then sear them in rosemary butter and serve with pepitas and pomegranate seeds. (A bonus with kabocha is that you don’t need to peel it.)

Seifert at Pumpkins for Pigs says if there isn’t a farm in your area listed on the PFP website, start by calling vendors from your local farmers’ market. “If they say yes, let us know who they are, and we would love to add them to our site,” Seifert says. “But most important: Do donate them. Don’t let them go to waste.”

← Don't Just Throw Away Your Pumpkin Pumpkins Can Be Composted, Donated to Farms, Fed to Wildlife →