Pumpkin Pollution is a Problem – Here’s What You Can Do 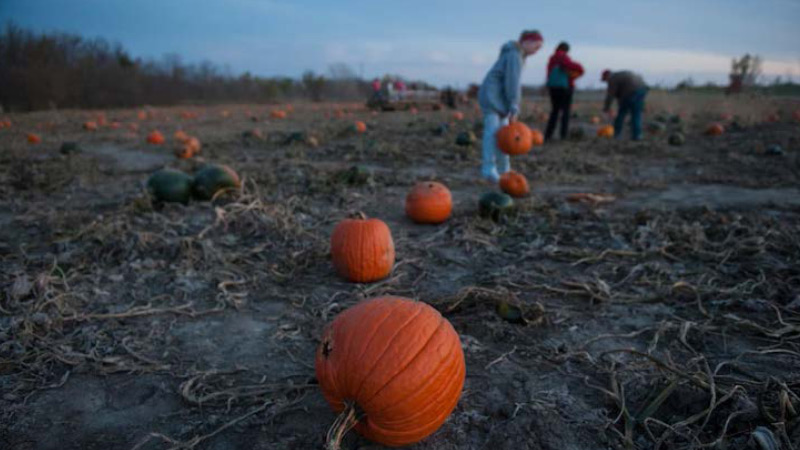 At the Roca Berry Farm in Roca, Nebraska, visitors inspect a pumpkin patch. Every year, millions of pumpkins end up in landfills where they contribute to methane pollution, but cooking, composting, or donating them to a farm can help reduce waste.
PHOTOGRAPH BY JOEL SARTORE, NAT GEO IMAGE COLLECTION

Tossing jack-o-lanterns in landfills generates harmful methane gas, but there’s a better way to get a second life out of your decorative gourds.

More than one billion pounds of pumpkins are grown in the U.S. every year, and after they’ve been used for Halloween decorations, pies, and jack-o’-lanterns, millions of them—large, mini, orange, white, heirloom—will end up in a landfill.

“Driving around after Halloween, you see people with pumpkins on top of their garbage cans. All of that will go to a landfill and become methane gas,” says Kay McKeen, the executive director at SCARCE, an environmental education organization based in Illinois.

Methane is a greenhouse gas. Compared to carbon dioxide, it warms the atmosphere in a shorter amount of time, which means it’s a particularly potent cause of climate change. (Learn more about greenhouse gases.)

And landfills—where we send as much as 40 percent of the food we produce—contribute 14 percent of U.S. methane emissions every year.

That’s why, in 2014, McKeen and her SCARCE colleagues began Pumpkin Smash, a collection event where local Illinois residents can bring their rotting pumpkins to 69 different locations to send them off to compost bins, and—of course—smash them to pieces.

By their own calculations, the group has saved 538 tons of pumpkins from the landfill.

“It puts nutrients back in our soil, it saves water, it doesn’t make methane gas—it’s just a win-win,” says McKeen.

But not everyone has access to pumpkin smashing events, so National Geographic asked our newsletter readers how they reduce their pumpkin waste. Our favorites, ranging from baking sweet treats to bringing a pumpkin treat to farm animals, are below.

Pumpkins have the potential to turn into great soil.

They’re just over 90 percent water—naturally adding moisture to compost piles that need to be damp to effectively decompose food waste. And decomposed vegetables and fruits like pumpkins add nitrogen, phosphorus, and potassium to soil, which helps new plants grow.

Here’s where smashing pumpkins can serve a useful purpose. Before tossing them in a bin or taking them to a community compost location, speed up decomposition by breaking whole pumpkins into smaller chunks.

“One of my family’s favorite things to do with our pumpkins is to let them decompose on the sunny side of the house behind the tall, decorative grasses,” says Amber Keller.

Pureed pumpkin is a common ingredient in baked goods like muffins, breads, and pies. To make a fresh version of this common store-bought ingredient, use the outer, meaty part of your leftover pumpkin.

“Not one pumpkin goes to the landfill from our kitchen. Each pumpkin is cut into slabs, softened in the oven, puréed in the blender, and frozen in ziplock bags,” says Una Hagen.

Pumpkin flesh can also be fermented, notes one reader, Elizabeth Flournoy: “I have been making wine—fabulous spiced wine is not hard to make from pumpkin!”

The seeds can easily be scooped out, rinsed, and salted or spiced in the oven.

Pumpkins are full of vitamins, minerals, and fiber, making it a great source of human nutrition. And according to the American Kennel Club, pumpkin puree mixed into dog food can help settle a dog’s upset stomach.

“They love it mixed with their dry dog food, and it’s very good for them,” says Anne Meier.

Many readers say they toss smashed pumpkins outside for deer, raccoons, or moose to eat.

While pumpkins are generally safe for wildlife to eat, experts say it’s best to let them forage and hunt for their own food. Feeding wild animals can spread disease when animals congregate. Some states, like Colorado, fine residents who intentionally feed wildlife. And trying to feed animals like deer can unintentionally attract predators like bobcats or bears and lead to human-wildlife conflict.

One popular piece of advice on social media is that pumpkin seeds are a natural dewormer for livestock or wild animals; however, there’s not enough scientific research to support this.

Instead, see if any local farms are collecting pumpkins as treats for their pigs, goats, and other animals—or for any other purposes. The website Pumpkins for Pigs, shows animal farms and sanctuaries around the country that take uncarved and unpainted pumpkins. The Oregon Zoo, for example, gives Asian elephants jumbo-sized pumpkins from farms to smash during its annual “Squishing of the Squash” event.

What ideas do you like best for keeping your Halloween pumpkin out of a landfill? Let me know, and consider signing up for our daily newsletter here.

← Ready to toss out your pumpkins? Here's how to keep them out of the landfill. 4 Ways To Get Rid Of Your Halloween Pumpkin (Besides A Landfill) →