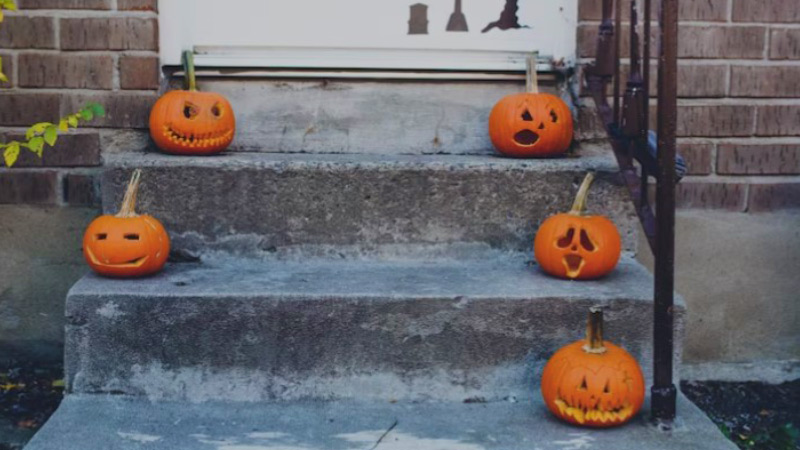 Here’s why you should never throw your carved Halloween pumpkin in a landfill — and what you can do with it instead.

As we enjoy the last pieces of candy we’ve secretly taken from our kids’ trick-or-treat bags, putting away the Halloween decorations is at the top of the to-do list. Chances are the pumpkins — which have been gutted, carved, and placed on the front porch since last week — are on their last legs, and it’s about time to get rid of them. But before you throw that orange monstrosity into the trash can, you should know that you don’t just have to sentence it to a landfill, where it would struggle to decompose and contribute to greenhouse gas emissions. Instead, there are a lot of other awesome things you can do with your pumpkin to help out your community.

Here’s everything you need to know about how to get rid of your old Halloween pumpkin — besides throwing it in the garbage.

Getting rid of your Halloween pumpkin should not involve garbage.

“One big misconception we hear a lot in the community is that people think that all organic material, like pumpkins, just break down in the landfill. Landfills are actually designed to not allow things to break down in a way that composting allows,” said Udara Abeysekera, ReThink Waste manager at The Environmental Center, according to Source Weekly.

When organic material is sent to landfills, it doesn’t have enough oxygen to break down. And this causes the food waste to produce methane gas, which is a huge contributor to climate issues.

“Methane has accounted for roughly 30% of global warming since pre-industrial times and is proliferating faster than at any other time since record keeping began in the 1980s,” warns the UN Environment Programme.

In the U.S., more than two billion pumpkins are produced annually, but only one-fifth are used for food, NPR notes. This means many pumpkins are being thrown out and dumped in a landfill to sit and give off harmful gasses.

Thankfully, there are ways to safely get rid of your old pumpkin without harming the environment.

You can do a variety of things with your pumpkin when Halloween season is over and it’s starting to break down. These ideas aren’t elaborate and don’t take a lot of time, which is perfect for busy parents who don’t want to complicate their lives.

1. Compost: Composting the pumpkin allows it to break down and is good for the soil. Break it into a few pieces and place fallen leaves on top of it. Alternatively, you can bury it, C2 Education suggests. If your city has a composting pick up or drop off, just put it out then.

2. Give it to the birds: “Using a firm pumpkin that’s mostly still fresh, cut the pumpkin in half horizontally and hollow out the top and bottom,” USA Today suggests. “Make holes in the two halves so you can string some rope or twine through and hang the pumpkin half on a tree limb. Then, just fill with seed.” Birds will get to enjoy the second life of your pumpkin, you might get in some bird-watching, and you’ll be giving back to wildlife.

3. You can make it a snack: If the pumpkin isn’t too far gone from being fresh, you can make plenty of foods with the pumpkin (pumpkin soup! pumpkin muffins! pumpkin bread!) or its seeds.

4. Donate it to your local zoo: See if your local zoo, petting zoo, farm or even animal shelter is looking for and would accept a pumpkin donation! Animals love to eat pumpkins, and this way you’ll be able to feed a super cute animal and also keep that pumpkin out of a huge trash heap. KTOO reports that the program Pumpkins For Pigs could be a good bet — through which you can figure out if pigs in your area would like a pumpkin. How fun!

The recommendations are different if you painted your pumpkins this year instead of just carving them. It’s not recommended you bury or compost a painted pumpkin since the paint could be toxic to plants. Unfortunately, the best bet for painted pumpkins is the garbage.

← Pumpkin Pollution is a Problem - Here's What You Can Do Your Decaying Pumpkins Are Basically Methane Bombs. Here’s How to Recycle Them →